We systematically investigated the geometric, electronic and thermoelectric (TE) properties of bulk black phosphorus (BP) under strain. The hinge-like structure of BP brings unusual mechanical responses such as anisotropic Young’s modulus and negative Poisson’s ratio. A sensitive electronic structure of BP makes it transform among metal, direct and indirect semiconductors under strain. The maximal figure of meritZT of BP is found to be 0.72 at 800 Kthat could be enhanced to 0.87 by exerting an appropriate strain, revealing BP could be a potential medium-high temperature TE material. Such strain-induced enhancements of TE performance are often observed to occur at the boundary of the direct-indirect band gap transition, which can be attributed to the increase of degeneracy of energy valleys at the transition point. By comparing the structure of BP with SnSe, a family of potential TE materials with hinge-like structure are suggested. This study not only exposes various novel properties of BP under strain, but also proposes effective strategies to seek for better TE materials. 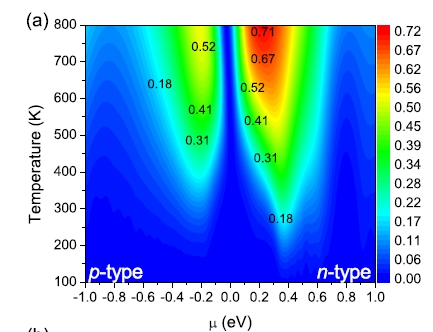